For the photographic collections on display at the Maison Européenne de la Photographie, Charlotte Rampling and Tilda Swinton become... picture rails. The portrait and landscape works of the likes of Irving Penn, Richard Avedon and Brassaï - to name but a few - will be hanging from their arms, creating a delicate, creating a mise en abyme of a museum or gallery, but which has something precarious or vulnerable about it. Taking it in turns, they hold up to spectators the original prints which went into the making of the history and iconography of the XXth century. Whilst one of them serves as a fragile stand or support for the full-length images, the other hands her a mirror, a sort of impromptu, perceptive glazier who holds up a window on the times. Interplay develops from the glances between them, but also with the eyes of the departed, immortalized forever on the photographic paper. But there is also physical interplay as well. Not only that of the black and white silhouettes brandished at arm’s length, but also in Rampling and Swinton’s movements.

It sometimes happens that inner walls of museums crack due to the weight of works of art hanging there. The flesh and blood walls reconstituted by the bodies of the two performers also buckle under the influence of the images. Some promptly give in and become, according to a principle of inversion, the props or struts for Rampling and Swinton’s body-works. Little by little, the black and white photographs then disappear into the black and white of faded, ghostly images. As shadows, now, of over-exposed negatives with only the original formats remaining - carbon paper specters deserted of all their subjects - the monochrome canvasses that Rampling and Swinton hold up become a frame for new self-portraits in the making. Their voices provide the captions for these saturated portraits and blinded landscapes. 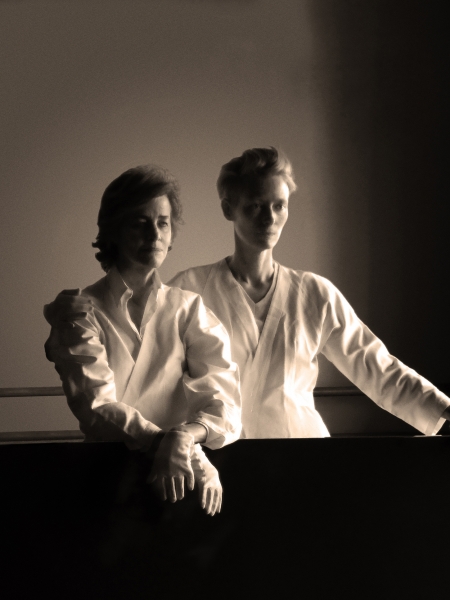 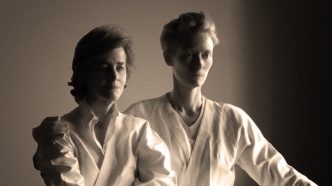 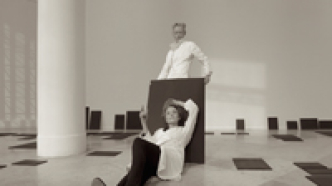 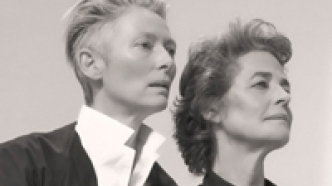