György Kurtág and Salvatore Sciarrino have the same profound sense of form: one has concentration containing existence in a single breath, while the other has suspension and the unsettling expectation of sound. In common there is the tension of walking on the edge of silence, on the edge of the infinitesimal.
In Kurtág’s Messages of the Late Miss R. V. Troussova (a work rarely performed, yet it is the one which made his reputation in western Europe), and …quasi una fantasia…, we perceive the paramount art of the composer. The Messages, with great intensity and concision, express absence, a dream, a shadow, bereavement, in a form so highly concentrated that any lengthy development is rendered untenable. The musician embarks, as always, on a quest for the essence, bare quintessence, with formidably delineated outlines. Kurtág quotes the Hungarian poet, Attila József: “Branch shapes stripped bare hold up empty air.” Subtraction is the exercise reflecting a world that has come apart, caught between form and fate.
For Salvatore Sciarrino, who calls Kurtág the composer of sincerity, it is time to pay tribute to two of his masters. In the 20th century, it is Alberto Burri (born in Città di Castello in Umbria where Sciarrino lives), the artist known for his “blacks” (Neri) and his white “cracked paintings” (Cretti). “When I spend a while looking at white or black, I see the same thing,” observes Sciarrino. And there is the composer Carlo Gesualdo, a cruel man, perhaps better known today for murdering his wife and her lover. Sciarrino’s work, striking in accent, dissonant in sound and irregular in beat, has the composer involved in a Borges-like way, introducing a quite different rationale. After the composer’s sonatas and virtuoso sections in both instrumental and vocal works, Sciarrino has – at last – created a new composition for piano and ensemble. 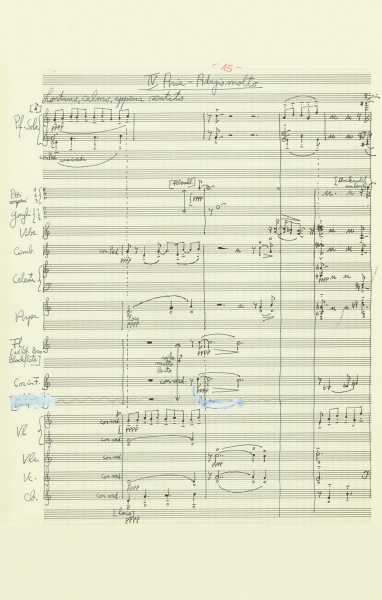