Jérôme Bel Pichet Klunchun and myself

Three names, three pieces (one of which is a film version) each of which reveals a state of Jérôme Bel’s thoughts on choreographic creation. Cédric Andrieux, Véronique Doisneau and Pichet Klunchun and myself are portraits in the true sense of the word. These pieces seek to capture the dancer’s uniqueness, and their relationship with their practice. These pieces give us a documentary, fully embodied look at those who make dance happen.
In Pichet Klunchun and myself, the portrait is a double one. The cultural distance with the traditional Thai dance performer demands a theatrical apparatus which leaves room for dialogue and alterity. Jérôme Bel and Pichet Klunchun stand face to face, both of them confronted with this reciprocal gulf in terms of codes and gestures. Step by step, they talk to each other, show each other, explain the movements, their meanings, and the way of seeing and doing them. From one tradition to another, what emerges is a fascinating mise en abyme of how dance is made, thought and conceived.

Pichet Klunchun and myself © Jérôme Bel 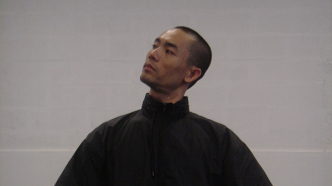 Pichet Klunchun and myself © Association R.B.