As if he was journeying back to the etymological origins of choreography - the art of writing dance through characters, figures and signs -, Marcelo Evelin has crafted a piece that is animal-like, irreverent, and punctuated by ritual and tribal elements. Dança doente (or Sick Dance) becomes, via the means of dance, moving script.
In this work, Marcelo Evelin looks upon dance as an illness or, more precisely, as a symptom of that moment when the body alters its self-perception. It feels infected by the outside world, drained and disheartened by outside forces. The artist has borrowed from the writings, images and dances of the Japanese butô choreographer Hijikata Tatsumi. Little by little, a sumptuous phantasmagoria emanates from them, interwoven between fascination and fiction. The conjunction between the costume and lighting design with that of the moving bodies of the nine performers, from all horizons and generations, gives rise to a stylistic form of a pictorial nature in the living space. An imaginary language snakes its way through the air. A whisper slides in between the fissures in order to proffer words from the siamese sister of life: death. Set to a trance-like musical composition by Sho Takiguchi, what comes into flower before our eyes is a host of different places, eras and the world in its entirety. But we also see an invisible universe, that of the dead that live within us and move us, in both senses of the word. With the audience in such close, porous, and sensory proximity, the piece takes on the allure of a viral and contagious dance. It chances upon us like a premonition of death. Or alternatively, a prodigious reaffirmation of life in all its power. 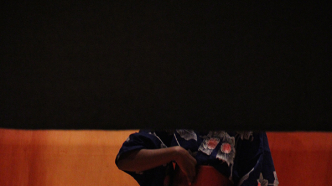 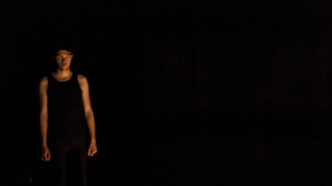 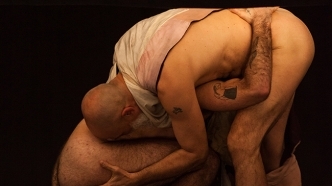