The choreographer Jérôme Bel will be overseeing this three-part programme. In it will be his latest work, devised in resonance to the other two. Going from a classical form to a contemporary approach, the Ballet de l’Opéra de Lyon will be taking us through the history of dance in this stimulating detour.
In response to the invitation by Ballet de l’Opéra de Lyon, Jérôme Bel himself will be putting together the entire evening’s events. He has chosen Second Detail by William Forsythe to open the proceedings, followed by Set and Reset / Reset by Trisha Brown. His own work will bring the evening to a close. Via this programme, Jérôme Bel will be putting into perspective the history of dance. William Forsythe’s work, emblematic of a certain model of classical dance takes us back to the XIXth century. Trisha Brown’s brand of modernity then transports us into the XXth century. The question for him will be how to continue this History/Story put in motion by the two choreographers.
First performed in 1991 by the Canadian National Ballet, Second Detail was subsequently integrated into The Loss of a Small Detail, a work that William Forsythe devised that year for his own company, the Frankfurt Ballet. Set against the frenetic rhythms of Thom Willems’s score, the work sees thirteen virtuoso, grey leotard-clad dancers battling it out.
Although it premiered eight years prior to this, the dance in Set and Reset / Reset by Trisha Brown is of a truly contemporary nature. Its highly original stage design by Robert Rauschenberg was reworked in 2005 when the work entered the Ballet de l’Opéra de Lyon repertory. Despite the rigorous stage indications, the dancers move with a level of fluidity bordering on improvisation. This breathtaking, milestone piece became the manifest for American post-modernist dance. 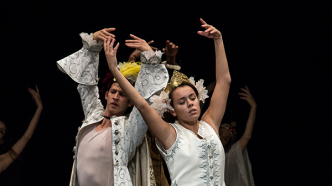