Dancers from Rosas and P.A.R.T.S. will be inviting Parisians to join them for a slow walk. The idea will be to dominate time with their bodies and to turn our ordinary, everyday moments into unique, intentional movements. For, walking, too, is dance in its purest state.

Open to all, the Slow Walk sheds light upon the frenetic pace of Parisian life by deliberately slowing down the cadence with which each of us goes from one place to the next. Both meditation and invitation to slow mind and body down, this slow walk gives us the opportunity to experience the urban space from a new perspective. After Brussels, Rosas now turns its attentions to Paris, the objective being to “meditate” the city so that its citizens can re-appropriate it through the medium of the most basic form of movement imaginable: walking. First performed in Belgium in 2016 in connection with with the Dance Day, this slow-motion flash-mob will bring together several groups of dancer-walkers, setting off from different departure points in Paris. They will advance at an average speed of under five metres per minute, and it will take each of them around four hours to complete their itinerary and arrive at the final meeting point. Participants will be invited to join the performance for whatever length of time suits them best, and starting from any place along the predetermined route. The simultaneous arrival of the walkers will be followed by a workshop lead by Anne Teresa De Keersmaeker in person with help from the Rosas dancers and P.A.R.T.S. students.

A Festival d’Automne à Paris production
The Fondation d’entreprise Hermès is the patron of the Anne Teresa De Keersmaeker Portrait.
In partnership with France Inter

Memories of the Slow Walk 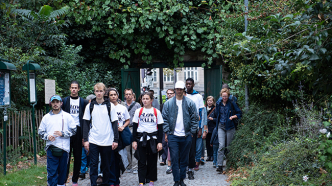 Memories of the Slow Walk