Anne Teresa De Keersmaeker’s body of work comprises little in the way of incursions into the latter Romantic repertory. Arnold Schoenberg’s Transfigured Night is one of its pillars. Devised in 1995 for an ensemble, this reconstruction is derived from a process of reduction, concentrating the poem’s dramatic structure in a passionate duo from which the narrative lines and expressive modulations emerge.

Verklärte Nacht (Transfigured Night) is a string composition by Arnold Schoenberg dating back to the end of the Romantic era (1899). Schoenberg took his inspiration from a poem by Richard Dehmel about a woman who tells her husband that she is carrying the baby of another man. The poem’s tragic tone finds its echo in the persistence of the chords. The emotional drive of the piece switches between deep passion and the subtlety of a timid voice, in apparent empathy with the protagonist’s suffering. The original choreography was conceived as an ensemble piece in 1995, in conjunction with a special event dedicated to Arnold Schoenberg at the Opéra de Bruxelles De Munt / La Monnaie. The piece was then rewritten for a duo, bringing its narrative and musical aspects to the forefront. The expressive crescendos and diminuendos guide us through the dramatic events, echoing the constantly modulating flow of emotions. What emerges is an uninhibited love story, illuminated by the pale light of a transfigured night. 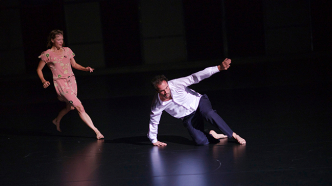 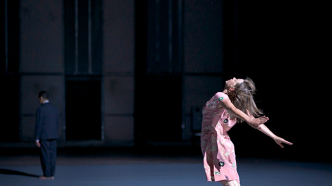