Two huis-clos, one in a thermal baths inn, the other in a restaurant. Two antiquated settings brought to life by a host of colourful characters. At first, Kurô Tanino’s staging takes us into familiar ground, that of an ultra-realist piece of theatre. However, we are soon taken by surprise. The different situations also take on a very different turn, leading us down paths which are both sensual and disturbing, burlesque and demonic.

Deep in the heart of the mountains of Japan, in a inn offering traditional hot spring baths, two puppeteers, recently arrived from Tokyo, await the proprietor in order to present their show to him. Intrigued by this dwarf and his expressionless son, the villagers gradually make their way closer and closer to the inn. Amidst the boiling hot steam, tongues lets fly, spirits stir, and destinies unfurl. We hear that the fate of the Avidya inn has already been sealed, in that it is soon to be demolished in order to way for a new railway line. In this cinematic huis-clos, we are confronted the coming to an end of a world, and the spectacle of various individuals caught in the midst of it. A whole palette of emotions emerges, ranging from anguish to sensual delight. A powerful homage to Japan’s deep-seated ancestral traditions, Kurô Tanino takes us on a voyage into the seat of our desires, and the confines of the unsaid.
––––––
Running time : 2h10
Performed in Japanese, with French subtitles

Performed in Japanese, with French subtitles 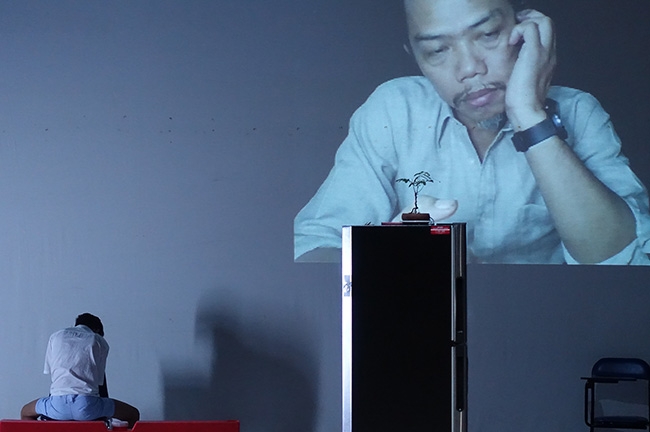