Alongside his career as an internationally recognised photographer/visual artist, Hiroshi Sugimoto has, for the last ten years or more, been designing stage sets for the performing arts. Hence, his interest in the major Japanese dramatic art traditions: nô theatre, bunraku or, in today’s world, kyôgen, a sort of comic, popular offshoot of nô theatre. “The logic of tradition is one of a constant rewriting in the present”, he explained in 2013, during his last visit to the Festival d’Automne, on the subject of this continuity, an integral part of Japanese civilisation. It is no coincidence that Sambasô carries the sub-heading “divine dance”, in that this piece refers to a sacred dance which takes us back to the dawn of humanity in Japan. Performed by three generations of kyôgen masters – Mansaku, Mansai and Yûki Nomura, Mansaku Nomura having been named as a national living treasure in Japan –, it is completed by Tsukimi-Zatô (“The blind one who admires the moon”), stemming from the zatô-mono genre. The latter brings to the stage the crippled victims of persecution. With stage sets inspired by some of Sugimoto’s photographs and also, costumes which he himself has designed, this epiphany-like diptych is proof of the credo of a seventy year-old artist and his conviction that the arts of performance represent “ the supreme phase for all art, where it refuses to become an object”.
––––––

Organised by Fondation du Japon
With support from the Fondation d’entreprise Hermès as part of its New Settings programme
An Odawara Art Foundation production
In association with Théâtre de la Ville-Paris ; and Festival d’Automne à Paris
In collaboration with Setagaya Arts Foundation – Setagaya Public Theatre
With support from the Fondation franco-japonaise Sasakawa
This show is presented as part of Japonismes 2018
First performed on 21 September 2011 at KAAT Kanagawa Arts Theatre as part of the Yokohma Triennial 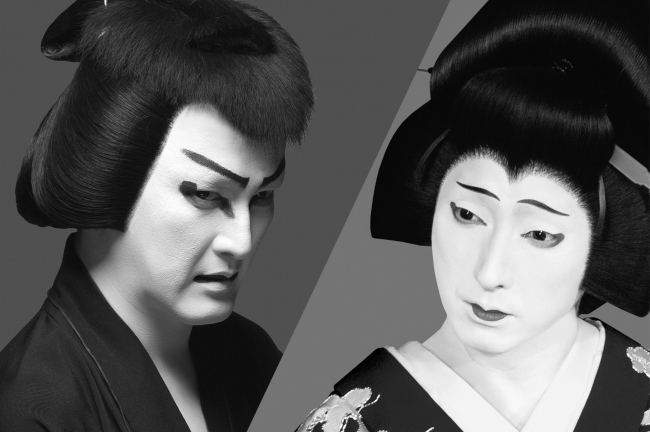