The group piece Sidewalk by the choreographer Volmir Cordeiro is a way of evoking metamorphosis as the only means of attaining freedom. Using the figure of the mask, and its capacity to reveal the true behind the hidden, the piece is to be experienced as a form of euphoria in which the overflowing energy of the six dancers opens up the possibility of a theatre of costumes, gestures and disorder.

How can we re-enact our relationships with liberty? In the hands of the choreographer Volmir Cordeiro, The Sidewalk becomes a place of flow patterns, mimesis and fiction which sets up as a horizon the possibility of reinventing communitarian experience. Spectators are invited to an explosion of joy, frontiers, and trances. Carrying on from Street, his duo with the dancer and percussionist Washington Timbó (2015), and his last group work The eye the mouth and the rest (2017) which seeks, via interplay between the different aspects of our attention, to bring down the infamous fourth wall that separates the stage from the audience, this new piece Sidewalk finds yet another way of approaching this question of frontality, through the activation of a state of shared euphoria. With their faces and bodies covered by coloured tights, keeping to the rhythm of the different musical sequences and driven by overflowing energy, the six dancers regroup, disperse, slither and slide in order open up places in which to set forth their dance. The spectator is prompted to plunge headlong into this game-like environment, a laboratory of revolt, a suspended moment in time, which enables the deconstruction of our relationships with the expected norms, whether they stem from the theatre or from our daily lives. Via this exploration of disguise or dressing-up, and its inherent fictional and grotesque elements, the choreographer offers up an exploded, inclusive framework by which each of us can expose ourselves.
––––––
Running time : 1h 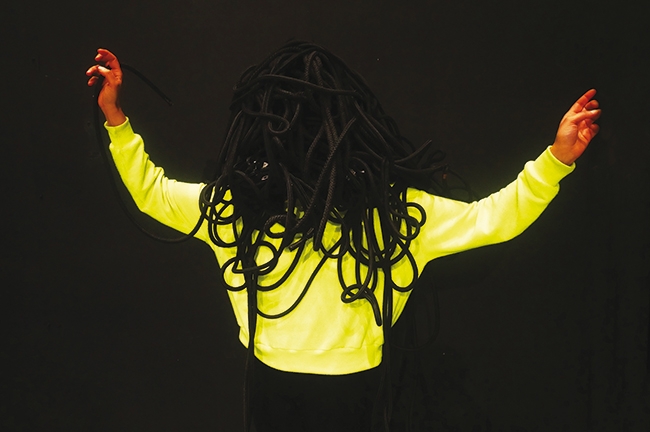