The work of Oriza Hirata, one of Japan’s foremost avant-garde directors, presents us with small worlds in order to bring out, implicitly, the imprint of the much greater forces at work there. “Quiet theatre”, in other words.
1909. The bourgeois interior of a Japanese family settled in Seoul, at the dawn of the Japanese colonization of Korea, lasting from 1910 to the end of the Second World War. History, though, is little more than a backdrop, its outline hardly visible. Hirata prefers to reveal the surreptitious hold it has on people where it runs into their everyday lives, filtering into their gestures, habits, speech, as well as relationships, attitudes and thought patterns.The staging fits into a framework the precision of which only finds its analogue in the cinema of Ozu. Here, the author-director maintains a close-up on this dining room in which everyday relationships between master and servant, Japanese and Korean, man and woman, parent and child are played out. The action is divided up into sequences, throwing light on the unconscious mechanisms of domination. The tea sipping, carefree climate and futile conversations betray the analgesia of these human beings in the face of discrimination.

Ten years later, 1919, same house, same family. On the 1st March comes the most significant Korean uprising in favour of Independence. The alarming backwash of this historic occurrence trickles through the walls, but the settlers are incapable of sensing the yearnings of the Korean people. The comic nature of the different situations and remarkable choral effect of the ensemble acting exposes the absurdity of this sense of superiority, in all its universality. 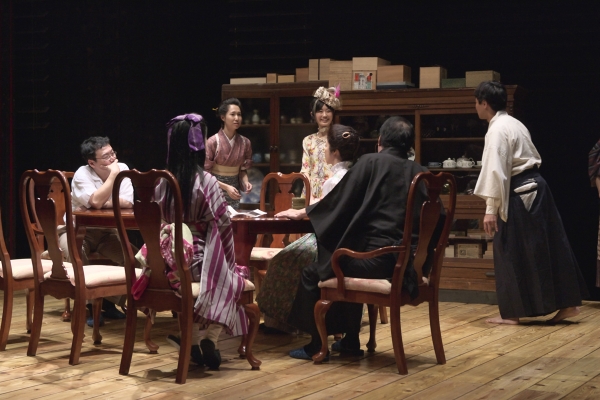