Taken aback by the powerful presence of Theater HORA’s handicapped performers, Jérôme Bel has devised a show which affords them not only visibility but also their own space: a place in which to dance and express themselves. This is done without seeking to limit the range of possibilities, nor hide the singularity of which their body is both sign and affirmation.
Following his invitation by the dramaturge at Theater HORA to meet the mentally handicapped actors that work there, Jérôme Bel has come up with a show that pieces together the experience of this encounter. The staging is one which exposes the uniqueness of these actors and affirms the necessity, in political terms as much as aesthetic, to invest the performance space with this presence. How does this state, generally hidden from view, provoke the accepted conventions that are prevalent in theatre in society alike? How can we make visible the inherent and radical criticism of ourselves that these bodies confront us with?
In order to show without demonstrating, Jérôme Bel has devised Disabled Theater: a “theatre which is precarious, slowed down, undermined and void of savoir-faire”. Through this modification of the theatrical tool, stripping it back to its bare roots, he seeks to open theatre’s black box in order to shed light on what this tool both contains and retains: the irrevocable blocks of presence that form this experience of what we term “theatre” or “dance”. As in the work of Véronique Doisneau or Cédric Andrieux, and their “unfolding” of the individual in terms of the practices and discourse that make him or her up, the performer is placed at the heart of the process. He or she is seen in a plural way, in terms of their otherness, and condition as absolute minority. Here, dance, picks up from where words fail. 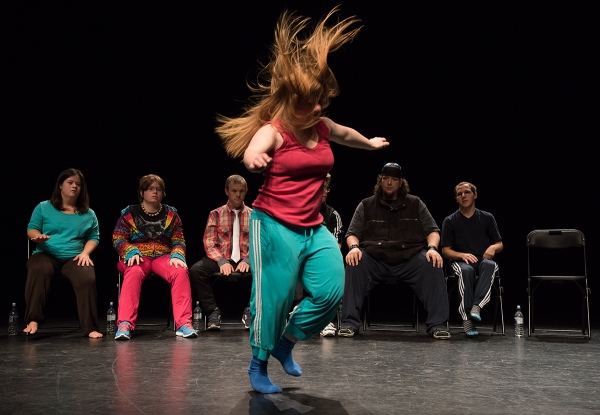