From Marcel Duchamp to Brian Eno, the dance of Merce Cunningham has journeyed through all art forms and tendencies, transforming itself with each artistic encounter. Opening up their repertory of works, London's Royal Ballet, the Opera Ballet Vlaanderen, and the Ballet de l’Opéra national de Paris each presents one of his pieces, unveiling different aspects of his aesthetic approach

The constant balance in Merce Cunningham’s work between avant-garde and choreographic tradition, experimentation and formal investigation has been a major factor behind his entry into the repertory of so many ballets. In conjunction with the Portrait dedicated to him, three internationally-acclaimed ballets will each be presenting one of his milestone works. In the case of the Ballet de l’Opéra national de Paris, the piece in question will be Walkaround Time, a true dada manifest dating back to the year 1968. A homage to Marcel Duchamp, Jasper Johns designed a set based on his piece Le Grand Verre, in which the interplay on transparency filtered the dance, leaving the bodies to recompose the perception of its forms like pieces in a moving jigsaw puzzle. The Royal Ballet of London will be presenting Cross Currents, the title of which exposes the poetical elements of Cunningham’s work. Honing in on the rhythmical qualities of each dancer, this piece hinges upon the merging together of the different phrases – like currents crossing over each other, then coming together in unison in order to better distribute themselves in the space. The last of the three works by Cunningham will be Opera Ballet Vlaanderen’s production of Pond Way. With its enigmatic title, this work, dating back to 1998, is characterised by its mysterious, aquatic feel. Set to the music of Brian Eno, the sliding movements of the dancers evokes ripples on the surface of the water. Alternating between the airy and the liquefied, their gestures flow in a subtle balance between synchronisation and its opposite, ‘décalage’.
––––––
Estimated running time : 1h20 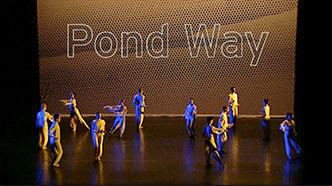 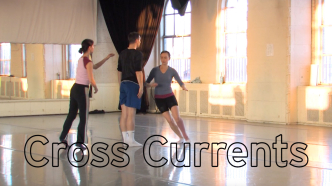 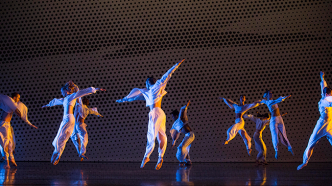