Winterbranch, which entered into the Ballet de l’Opéra de Lyon’s repertory in 2016, reveals a darker side to the work of Merce Cunningham. Amidst a dissonant ambience, bodies fall and get back up again, in a constant struggle with gravity. In resonance with this downwards pull towards the ground, the choreographer Alessandro Sciarroni has devised a vertiginous, haunting form of gyration for his dancers.

For this programme, the Ballet de l’Opéra de Lyon focuses on the idea of dance as an instrument for understanding the body via its elementary operations: lunges, tumbles, gravity, repetition, and the relationship between verticality and horizontality. Merce Cunningham and the Italian choreographer have, a priori, little in common, except, that is, their shared belief in envisaging the human body as an infinite source of potential, and which functions at the heart of a vast system of signs. In Winterbranch, Cunningham seeks to find a form or framework for the act of falling and getting back up again, the abscissa and the ordinate of movement. Rauschenberg’s light-dark stage design and the shards of sound in La Monte Young’s minimalist composition, entitled 2 sounds, imbibe the work with a sombre tonality. As in Folk(s), which pushed folklore dance to implosion point, Alessandro Sciarroni investigates repetition as a form of limit. Stemming from the “turning” project, TURNING_motion sickness version, created for the dancers at the Ballet de l’Opéra de Lyon, seeks to come closer to perpetual movement – to the extent of dizziness. At the crossroads between the whirling dervishes and classical ballet, this intriguing piece subjects the performers to a test of mastery and endurance, indistinguishable from a form of release and consenting to the incontrollable
––––––
Running time : 1h10 including interval

Please telephone directly the theatre booking office or register to the waiting list for shows which are listed as “sold out” on the Festival website.
Le CENTQUATRE-PARIS 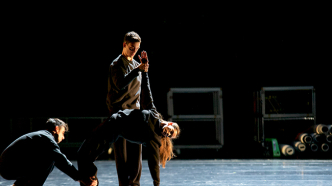 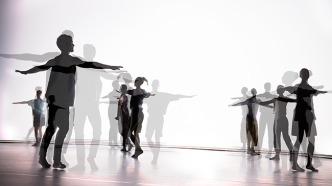