Restaged in French especially for the occasion, the two-part piece by Silvia Costa articulates the performance of a drama by Samuel Beckett with its reinterpretation in a musical, visual and choreographic installation. In this no-exit "huis clos" play in which everything is repeated, comedy is confined to irony and smiling to sarcasm.

Silvia Costa brings to the stage Comédie by Samuel Beckett, the English-language version of which is Play, a piece in which the three dead protagonists ruminate on their vision of the love triangle which has united them. Stuck in a temporal loop, each of them relates their story purely from their own perspective, without any interaction with the others, enabling us to reflect upon this impossible ending and on the solitude to which it condemns them. The Italian artist distils the feeling felt by them “…not merely all over, but as if…never been”. This line taken from the start of the play expresses in an extremely concise manner the tragic nature of their condition. Did they make wise choices during their lifetimes? Does their disappearance free them from the tumults of their existence? In this desperate spiral of jealousy, unrequited love and betrayal, dwelling on thoughts is the only way to occupy the emptiness of time. In the second part, three dancers take over the space, as if they were the projections of their subconscious. They evolve in a more organic way as part within a choreographic and sound-based staging, designed in conjunction with Nicola Ratti. Both sensual and abstract, the musical composition accompanies this theatre of slowed-down gestures and actions. Centre stage, a tightly-woven, jumbled up mass of vintage furniture constitutes a form of domestic gridlock, the different elements of which are on the brink of collapsing. On the other hand, the costumes, a means of “deconstruction”, provide access to the bodies, or open windows on their inner selves. Just like the effect of the stage set, the trap closes in on the spectator, caught between laughter and tears. 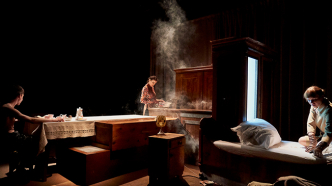