Born in Beirut, Rabih Mroué is the author of a body of work at the crossroads of theatre, performance and visual arts. Directly related to economic and social reality in Lebanon, he seeks to explore the issues and contradictions that rack society.
The relationships between images, expression and representation are at the heart of Riding on a cloud, a performance piece which closely examines the passing on from one photograph to the next, in order to create a story which is as personal as it is collective. Rabih Mroué: Trilogy goes back to three of the artist’s “non-academic conferences”, and is situated somewhere between a lecture, performance and conversation with the audience. Rabih Mroué selects certain images there and shifts them around in order to go deeper into the social and symbolic implications, fissures and off-screen elements. This is the case whether it might the filmed declarations of a suicide candidate in 1985 (On Three Posters), photo-collages made for political ends (The Inhabitants of Images) or video footage of the first instants of the revolution in Syria (Pixelated Revolution). These works, in which the document is mixed with fiction, probe into Middle East modern history and its tormented present, providing us with a very necessary form of distance. In other words, a space where we can reflect upon media-coverage of the conflicts and our globalized, visual culture.

Rabih Mroué: Trilogy
On Three Posters
A non-academic conference by Rabih Mroué (2004)
English translation by Mona Abou Rayyan and French translation by Masha Refka
A production by Ashkal Alwan/Beirut // The piece was first presented in June 2004 for the Performance Studies International Conference (Singapore) 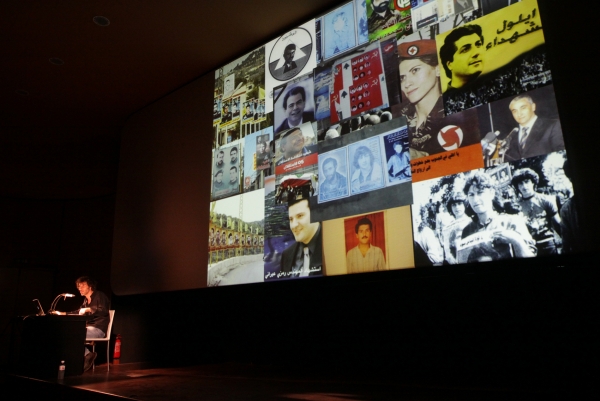 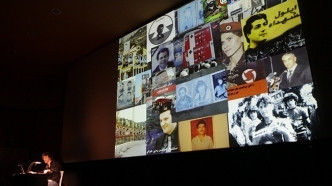 The Inhabitants of Images © Rabih Mroué 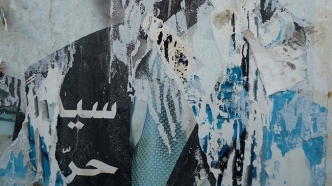