Shaman Kim Kum-Hua was born in 1931 in the Hwanghae Province – now part of North Korea – only to later settle in Seoul. In 1984, she received the title of ‘Living National Treasure’ in recognition of her work in preserving a number of rituals, such as the spectacular fishing-boat blessing. She received her initiation ceremony at the age of 17 after a mysterious illness showed her as being ‘chosen’. In 1974, she won National Prize for Popular Arts. This marked a turning point in Korean history because, at the time, shamanism was considered neither as a respectable profession nor as a legitimate art form. Yet Kim Kum-hwa’s deep spirituality, verve, divining powers and gracefully elegant movements are testament to a rare form of perfection.

While faith in natural and supernatural forces is part of Korean shamanism, it is less a religion than a social structure – it is more concerned with man than with gods. Its structure evolved outside the same scholarly circles that merely tolerated shamanism to a minor extent. Korean shamanism has proven to be astonishingly adaptive over the past fifteen centuries, from hunter-fisher societies facing the greatness of nature, to farmers and herders dealing with seasons and animal life cycles, right up to cities of the industrialised world. Shaman do not pray, rather they use chants, song, dance, ornaments, decorations and ritual objects (altars, paintings, offerings, fans, the ringing of bells and burnt paper flowers) to repair lost order as opposed to building new order.

Kim Kum-hua will be accompanied by assistant shaman and musicians as she takes to the Théâtre de la Ville with the Mansudaetak-gut ritual. First, the venue will be cleansed followed by an invoking of the moon and sun spirits, other village-protector spirits will also be called upon. Then, spirits of the ‘bad dead’ (those with no descendants) will be called before the pestle game and straw cutter ceremony for a bountiful crop. 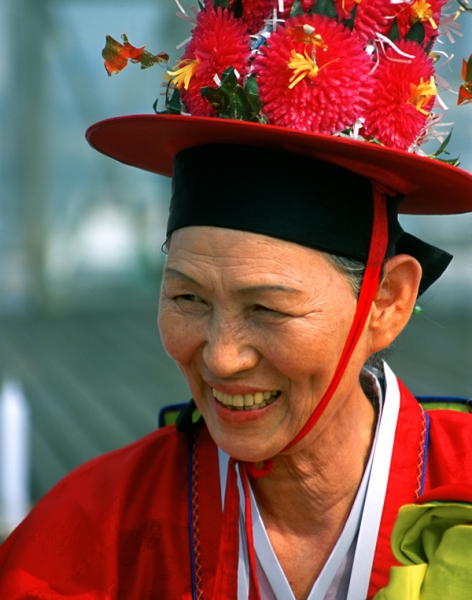