«Beckett meets trash TV», was the reaction to the show in the press. Funny and disturbing, Real Magic, the latest offering from England’s Forced Entertainment collective, places the actors in the trap of a scene which is repeated over and over again, to the point of distortion. The imagination soon reigns supreme.
Against a background of canned laughter and looped applause, the characters in Real Magic, taken straight from the world of TV game shows or an absurd cabaret act of some kind, have to guess answers to questions about which they have no idea. As the show moves on, they swap roles, places and costumes in a deftly comic way which pays tribute to pop culture - but in a decidedly tongue-in-cheek way. Founded in 1984, and with its origins in Sheffield, the company is no stranger to Paris. A regular guest at the Festival d’Automne à Paris, its diverse range of shows never ceases to take audiences by surprise. The oxymoron present in the company’s name, Forced Entertainment says it all. Under the keen eye of its artistic director, Tim Etchells, the troupe delights in making audiences laugh whilst making them think about what they are seeing on the stage. In an indirect way, Real Magic, which premiered in the weeks leading up to the Brexit referendum in 2016, talks about the world in which Forced Entertainment devises its work. This game in which “everyone’s a loser” holds up a mirror to the ensnaring allures of capitalism in the Trump era. The game, onstage as in real life, is fabricated. Forced Entertainment enters into it with immense pleasure, and lucidity. 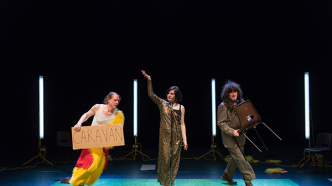