Initiated by the Musée de la danse, Fous de danse is an invitation to experience and practice dance in all its forms: warm-ups, participative choreographies, presentations of solos, duos and shows. The different bodies follow on from each other forming an ephemeral dancing community.
Founded by Boris Charmatz in 2009 with the idea of the radical enlargement of how we envisage dance - showing it, practicing it -, is the Musée de la danse a place, idea, act or collection? Launched in 2015 in Rennes, the Fous de danse event asks these questions once again but with the addition of two ingredients: the public space as a hub of physical, spatial, and territorial issues; and the audience’s total involvement - as actor, spectator or mass group in movement. Somewhere between festive event, manifestation, giant training session, participative work and real time evolutive sculpture, Fous de danse brings us back to the utopia of danse as a collective gesture: a place where movement creates something in common. It is also the utopia of a form of dance in which, far from opposing or dissipating them, the different genres and styles might co-exist, share their various approaches and be able to dialogue with each other through porosity. From classical ballet to the hip-hop battle, the giant Soul train to the contemporary solo, the presentation of duos to the warm-up, all these elements form an ephemeral territory of fluctuating borders, in which each of us can wander around - like a museum without walls, labels, or hierarchies. 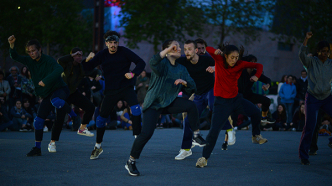 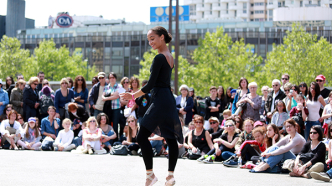 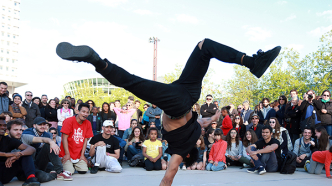