Three women return from the past thanks to three female contemporary historians who bring them back to life via three separate accounts. Here, the actress Jeanne Balibar uses them as the basis for a staged reading. Four women from today’s world take a particularly eloquent and incisive look at three emblematic female destinies.

Time has still not erased neither the memory of the Portuguese slave Pascoa put on trial in the year 1700 for bigamy, nor Violette Nozière, a victim of incest condemned to death in 1934 before receiving a full pardon 1963, nor the incomparable actress Delphine Seyrig, Marguerite Duras’s muse and militant activist involved in the feminist struggle during the 1970’s… In this production, three women with their feet firmly rooted in the history of the times they lived in and three unique destinies are brought to the stage. The latter, on a par with the historical study, have the power to make the dead come back to life by bringing them closer to us.
Whilst taking heed of each author’s particular style, Jeanne Balibar, gives voice to these struggles from the past. She transforms them into literature, at its purest, seizing upon the words in order to turn them into the stuff of theatre. Audiences are given an insight into three different paths in life, each of which speaks volumes to us about struggle and freedom. Three historians and an actress involve us fully in this unique and captivating experience, and enable us to hear, in a free and unforced way, much about the feminine condition.
––––––
Estimated running time : 3h

Please telephone directly the theatre booking office or register to the waiting list for shows which are listed as “sold out” on the Festival website.
Théâtre de la Ville - Les Abbesses 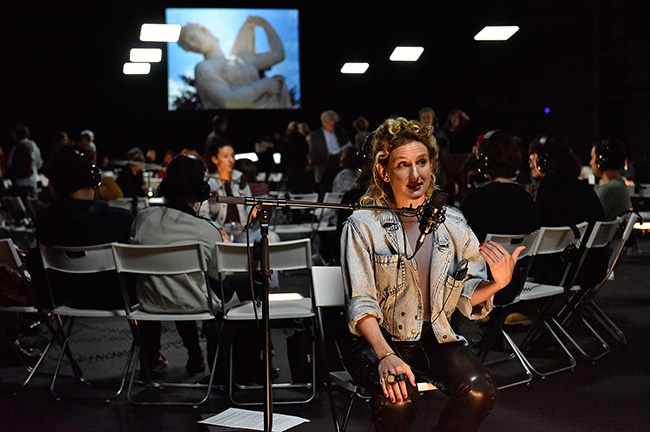