After The Thrill of It All in 2010 and The Coming Storm in 2012, Forced Entertainment, the experimental theatre company based in Sheffield, England, returns to the Festival d’Automne à Paris with a historical piece. In The Notebook, the director Tim Etchells took his inspiration from the novel of the same name by the Hungarian authoress Ágota Kristóf, published in 1986. This work, which was adapted for the cinema in 2016 by the Hungarian film-maker János Szász, tells the story of a pair of twins who, during the Second World War take refuge in their grand-mother’s farm, deep in the countryside, in order to avoid having to go to the front-line, and be confronted with all the bloodshed of war. Living in extreme poverty, their view of the war is void of any sentimentality, unflinching. In their eyes, there can be no doubt that these confrontations are linked to the decline of Central Europe, and that of a society sliding down a slippery slope towards depravation, cruelty and opportunism. A society dominated by one-upmanship, and petty thirst for power. In this intimate, compelling text, dark humour is never far away. Onstage, the two actors Richard Lowdon and Robin Arthur, dressed identically, get under the skin of these conniving brothers as they tell, side by side, not just their own story but also that of a whole nation. A thought-provoking, disturbing narration in which we hear only one voice - and which is brimful of humanity. 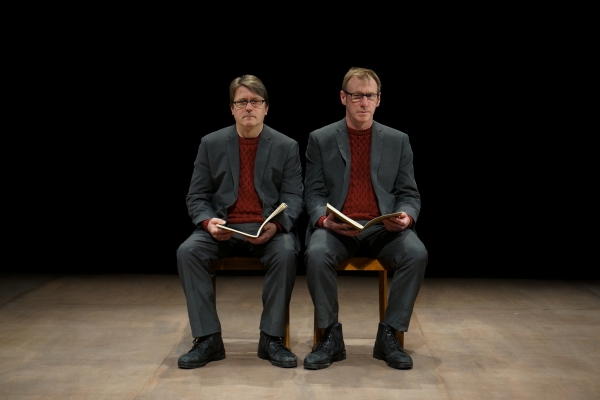