Steven Cohen Put your heart under your feet… and walk !

How can we carry on living and create after losing our soul mate? Steven Cohen puts his heart under his feet and walks. His declaration of love to Elu, his partner and artistic collaborator for twenty years, takes on the form of a farewell ceremony which transforms into a celebration of life energy and a profession of artistic faith.

Steven Cohen, choreographer, performer and visual artist, has developed a body of work which goes beyond the expected norms, and in which his metamorphosized body becomes an aesthetical and political manifesto. After walking through a Johannesburg squatter camp dressed in a chandelier tutu in Chandelier, stamping on plates or smashed up bones in Golgotha, and sharing the stage with his nanny in The Cradle of Humankind, he continues, via this major work created in 2017, his deeply political act of the walk-about and its confrontation with different forms of violence, ranging from the intimate to the collective. In it, the artist appears alone on the stage, perched on platform soles comprised of two coffins, and steps across a stage littered with ballet shoes decorated, in a reference to the classical dancer that the deceased Elu once was, with rare and precious objects. Propped up by giant stilts, beneath a flickering light, he strives to find his balance amidst the sombre depths of grief and grieving. Images of blood and guts taken from a performance inside an abattoir appear on a screen. In the midst of the ghostly images, Steven Cohen gives himself over to a ritual of the most intimate and radical nature as he sets about inscribing the memory of the one he loved into his own flesh. Pushing the limits of the spectacular to the very limit, he questions the possibilities of his art as a means of rendering tangible the hardship endured by the mind and body in response to the death of someone who is close to us. In doing so, he reveals the universal nature of this fact of life.
––––––
Estimated running time : 50 min 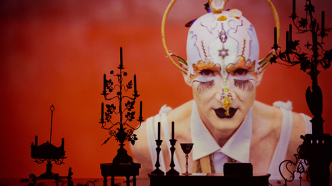 "Put your heart under your feet... and walk!" (Teaser)