Frank Castorf, one of the emblematic figures of German theatre, revisits, in French, Jean Racine’s Bajazet. Tackling this classical author’s work is a challenge few non-French speaking artists have taken up. This production sees Castorf confronting it with Antonin Artaud’s famous essay, Theatre and The Plague, the first chapter of Theatre and its Double.

In his majestic adaptations of Dostoyevsky, Bulgakov, and Celine, for example, Frank Castorf has brought us theatre which serves as a proof of liberty in itself, and which does not shy away from human weakness or cowardice, nor its contradictions. By combining Racine and Artaud, he brings to light what these two French poets have in common: the spoken word, theatre’s anchorage point, as the crucial place where the burning heart of their works is played out. This, of course, has much to do with Castorf’s own uncompromising, unsentimental brand of theatre. The spoken word is the arm with which Racine’s heroes untangle themselves from the constraints of the straightjacket around them, allowing them to follow their true desires. For Artaud, it was via the reinvention of language that he could free himself from what birth, society and language had imposed on him, enabling him to be reborn as his true self, the ultimate goal of his life and his incandescent art.
Bajazet plays out in the huis clos of Constantinople’s seraglio. The Sultan himself is absent. For each character, favourite, pretender, brother or vizier, true love comes into contradiction with political ambition, and living out one’s passions to the full is synonymous with death. The tragedy exposes man’s altogether fallible spirit and the impossibility of pure, unadulterated feelings. By adapting Racine, Castorf transports us from one century to another, brings two major authors together and wakes up our interior demons.
––––––
Estimated running time : 4h interval included
Performance with English subtitles on 6 and 8 December

Please telephone directly the theatre booking office or register to the waiting list for shows which are listed as “sold out” on the Festival website.
MC93– maison de la culture de Seine-Saint-Denis 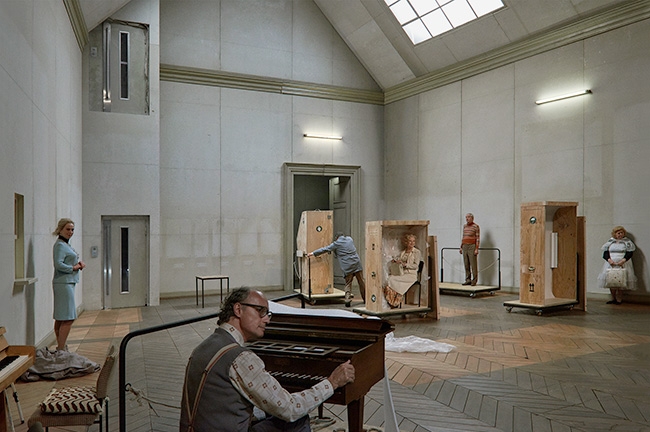